As we observe the 246th anniversary of American Independence, decentralized tech is driving an evolution in governance, offering new models for organizing priorities and coordinating resources. The secrets for making these new ways successful are older than we might think.

The Future of the Nation-State

Concerns over the continued viability of current nation-states have been emerging for some time now. This 2018 Guardian piece summarized trends that were clear then: "For increasing numbers of people, our nations and the system of which they are a part now appear unable to offer a plausible, viable future." The piece noted that more and more of the world's populations including the politically polarized population of the United States now live in countries that "that appear whole only on maps."

💡
"For increasing numbers of people, our nations and the system of which they are a part now appear unable to offer a plausible, viable future"

The erosion of geography based governance

For our known history, governance has usually been tied to physical locations ("jurisdictions") with ownership claims, boundaries, and laws that applied within those boundaries.

In today's digital world, the geographic location of a citizen is no longer the only arbiter of the person's culture, well being and financial security. Technologies like crypto and Zoom let us work and move funds without regard for international boundaries. Today's tech-enabled firms already operate like digital meta-states and likely presage the emergence of a new kind of tech-enabled state that is more inclusive and accessible than the exclusive offshoring options that wealthy multinationals take advantage of.

The crypto enthusiast in me says "yes this is where DAOs come in" but I also realize that getting the design right will take some time (and experimentation) to learn what features and structures are required to make a truly sustainable borderless nation based on blockchain technology.

Some have followed this "demise of nation-states" line of thinking to the conclusion that nation states will become what Benedict Macon-Cooney calls "network states" - digital nodes in a (blockchain or chain of chains?) network of public and private platforms that enable a global direct democracy.

It would start as experimental sandboxes and progress toward maturity much the same way that software platforms mature as they release new versions. And Macon-Cooney astutely observes the competitive aspect of this - with examples like Estonia's e-residency program that offers access to the EU market without the need for a physical residence in the country.

This transition will make for some weird moments. Like Putin's bizairre economics lecture at the "St. Petersburg International Economic Forum" - delayed an hour by cyberattacks - where he peddled his version of a post-dollar global economy. Pure propaganda, but whoever wrote this crap is definitely reading the room. Around the world individuals and developing nations alike are watching for opportunities to be part of a more equitable financial ecosystem.

As we observe the 246th Anniversary of our Exit from the British Empire, its a good time think about our own nation-state experiment and how its going.

The original recipe for success, summarized nicely below by George Washington in 1783, has been easier said than done - especially point #4.

"There are four things which I humbly conceive are essential to the well being of the United States as an independent power:

In my thinking, these four points - especially the last one - is still the secret for making the new innovations successful over the long term. In our current phase of history, those with centralized power have done precisely the opposite of #4 - accumulating advantage at great expense to the community.

This is what is driving the restless search for better options and specifically the shift toward decentralization and the blockchain technologies that enable it.  Decentralization represents a way to end the wealth and data hoarding behaviors of today's centralized incumbents. Key point: Decentralization is not really about avoiding accountability. Its about ensuring that no centralized player gains a unique ability to hoard wealth and data while avoiding accountability itself.

When established org structures - whether companies, nations, or others - fail to meet the expectations of the people they are intended to serve, those people intuitively look for better options.

How organizations respond to their customers, employees or citizens impacts which options are used. Unfortunately many citizens are being pushed toward the Exit option, because of the behaviors of those who govern. Sadly in the US, political gridlock and polarization may also be pushing portions of the citizenry to think about other options.

I think about these issues from 2 perspectives:

My hope is that we can pre-empt destructive pathways like secessions and find ways to make the American experiment increase in its equity, goodness and prosperity for all. I believe that emerging technologies like web3 and crypto can give us better building blocks for building a better more equity driven society. One that avoids the kinds of financial inequities that breed extremism. It all depends on whether we can keep George Washington's advice (above) top of mind in our work and relationships.

So where might this go? Put your imagination in hyperdrive for a moment - a few potential developments, offered without judgement:

Lots of potential benefits and bugs/problems in these thought patterns. But this represents some lines of thinking that a broad set of innovators are intuitively converging on.

Bitcoin continues is the high teens/low 20s, inflation is still high and the economy is slowing down as consumers spend less. But the week also saw signs of continued clarifications and buildout of the next generation capabilities.

I'm blessed to be in a family with kitchen skills and the good sense to stay ready to celebrate life. So each week I'll share a few "sensible ideas" for good food and good times!

Just what the 4th of July Ordered...

Above, my Bison Burger on Miami Sweet Onion Roll, Chive and Horseradish Havarti cheese, arugula and Campari tomatoes. The trick for not overcooking bison: iron skillet, medium heat in butter (I like Wegman's Butter Boy but any salted butter will work just fine).

When life gets crazy, get some friends and family together and cook up some good food! Julia Turshen can help you get started:

Each week, this segment focuses on sharing knowledge about Nature's capabilities and lessons, to inspire learning and proper valuation of the ecosystems we depend on for survival.

The importance of mentors in Condor society

The story below shares some emerging insights about the societal structure and mentoring needs of California Condors. In the 1980s less than 30 of these magnificent birds were alive in the wild. Today the population has been brought back from the brink thanks to the dedication of breed and release teams. Note the tags on the wings of the condors. These help with tracking the whereabouts and progression of individual condors over their entire lifetime. CondorSpotter.com lets you look up individual tags and view the family lineage of each bird, including its siblings and offspring.

Researchers have discovered younger condors released into the wild need older more experienced mentors in order to thrive: "...release programs need an adult to serve as a role model and enforce the social hierarchy that is crucial to the flock’s survival."

You can learn more about the California Condor at the Birds of the World's online guide. The link below shares the journey of one older (and apparently irritable!) condor arriving in the Yurok Tribe ancestral lands to serve as a mentor for younger condors.

If you haven't subscribed, click the subscribe button and get S3T delivered early each Sunday morning to your inbox. This gives you a curated selection of timely topics for understanding change, sharpening your leadership perspectives, and planning - as well as enjoying - your journey.

Hope you are set for a Happy 4th of July weekend! Thank you again for subscribing and sharing S3T! Feel free to forward this to a friend and continue the conversation on the S3T Discord, Twitter or LinkedIn. 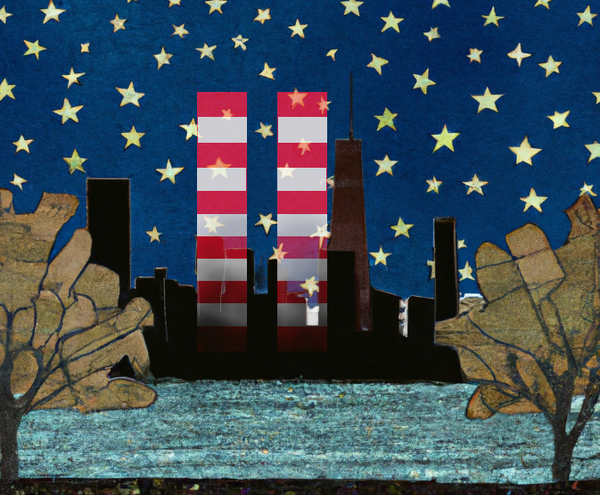